This recipe is deliciously simple and healthy. It is a sure crowd pleaser, combining two traditional ingredients; peas and fish. You can knock up this recipe in no time using store cupboard ingredients already at home. 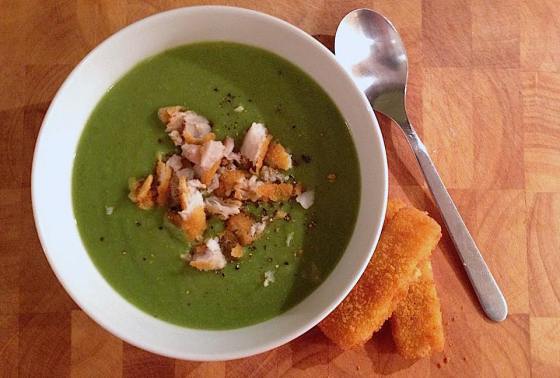 Pre heat the oven to the recommended heat on the fish’s packaging. Roughly chop the onions and garlic. Sauté the onions and garlic in a deep stock pot until soft. Chop the potatoes into small cubes to speed up the cooking process. Once the garlic and onions are soft; add the water, stock and the potatoes to the pan. Cover with a lid. Put the fish on a baking tray and pop into the preheated oven. Turn halfway through the recommended cooking time.

When the Potatoes are soft, tip in the bag of frozen peas and add the chilli flakes. Re-cover with the lid and leave for a further 5 mins. Check that the fish is cooked and crispy, then remove from the oven to cool a little. By now the peas should have cooked, if so, remove from the heat and bend until smooth. Top with the crumbled up fish.

Serve with a squeeze of tomato sauce if you dare..

Occasionally at home we buy a big joint of pork when we fancy it. Buying a joint of ham is cost effective and i find a lot nicer than packet ham. This would last us for just over a week. We add the the ham to salads, sandwiches, sauces and even.. you guessed it! An old favourite Ham egg and chips!

To cook the ham

Normally when you buy any type of a joint of meat the label will have some kind of cooking guidelines, which will give you an idea of time and temp depending on its weight. To cook the pork i place the meat in a deep heavy duty pan and fill with boiling water. Make sure the water is at least 2 inches above the meat. Put the hob on a medium heat and bring to the boil, then simmer for an hour and a half. Remember to skim the top off the water for any foamy impurities. Once the ham is cooked remove from the pan and leave to rest with a foil blanket. Pour away at least a quarter of the stock. Add one chopped onion to the salty stock and leave to boil for 5 mins. Then add the frozen peas. Boil for a further 6 mins. The ratio between Peas and Water should be Pea 3/4, Water 1/4. When the time is up blend the mixture till smooth and silky. Crumble over some cooked ham and a twist of black pepper. There you have it! Ham & Pea Soup! 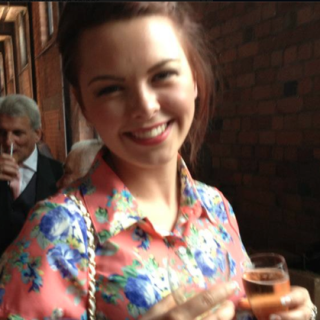 Aspiring Chef, lusting for knowledge, skill and creativity for all things food.

Who is Eats & Treats?

Eats & Treats was founded by Imogen Wood whilst studying her Media Production diploma at South Gloucestershire and Stroud College - United Kingdom. Imogen gained a keen interest in cooking from a young age, through her mother and grandmother. Baking, learning tips and family recipes together. Imogen is currently on a year long trip around South East Asia and working in New Zealand. After traveling she will pursue her dream career in food journalism. All the recipes that you will see on Eats & Treats are recipes that Imogen has created, tried, tested and loved.